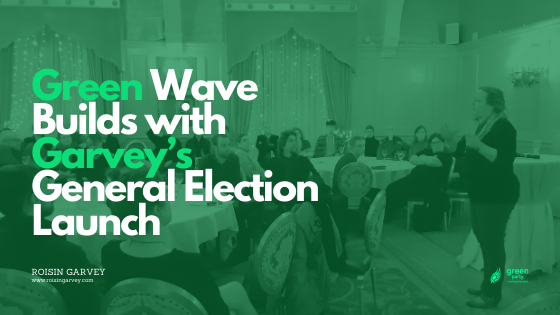 Garvey was elected as a County Councillor in 2019 and is a long-term community activist. She vows to work for more and better local housing, increased rural transport, improvements in health services and more support for Clare’s farmers. Cllr Garvey spoke of her determination to support small business and increase sustainable jobs in Clare saying:

“Sustainable rural development is key to the lives of the people of Clare. Clare deserves a strong, honest female voice that accepts that the effects of the Climate Crisis is real for the people of Clare. I want farmers and those at risk of  flooding protected sooner rather than later. I want to give the younger people a voice, and to give them hope in relation to  their concerns about climate and their futures”.

Garvey was joined by Eamon Ryan T.D., leader of the Green Party and Grace O’Sullivan Member of the European Parliament (MEP) as well as local business people, youth group leaders and farmers. Garvey said “I was delighted to see the Chairman of Clare IFA, Willie Hanrahan, attend my launch. We have worked together and I know how important it is for the Greens and farmers to work together now more than ever”.

Ryan praised Garvey for her years of continued devotion to the people of Clare saying “The huge turnout of Clare residents seeking to volunteer to get a Green Party candidate elected is a reflection of public support for  sustainable development. A strong way to achieve this is to have Green representation in the Dáil or in government to prioritise the needs of the people of Clare.”

MEP Grace O’Sullivan endorsed Garvey and thanked her supporters, noting that Green membership is increasing with 2500 members nationally, 49 councillors in the republic (up from 13) and 7 in the north (up from 2).

“The Green Party are breaking through, consolidating and demanding the solutions needed from the next government. Now we have to make sure the next Irish government harnesses all the initiative, inspiration and innovation Ireland has to offer, to ensure a just transition to a stable society and economy for us and future generations”.